Mankind has been using the wind for centuries to produce mechanical power for milling grain and pumping water. In recent times wind turbine technology has enabled wind energy to be harnessed directly to generate electricity. Wind turbines generally have a set of three blades which rotate at 10–30 revolutions per minute. The blades face into the wind, the wind forces them to go round, which then spins a shaft inside the turbine, which is connected to a generator which produces electricity.

Wind energy is plentiful, renewable, widely distributed, clean, and reduces greenhouse gas emissions (when it displaces fossil-fuel-derived electricity). It has a great potential in both onshore and offshore wind farms.

Wind power is currently the largest component of renewables generation (excluding large scale hydropower). Globally, the capacity for generating electricity by wind power increased more than fivefold from 2000 to 2007, and the rate of increase has been rising in recent years (suggesting even faster rates of capacity growth in the coming years). By 2007, wind power accounted for approximately 19 per cent of electricity production in Denmark, nine per cent in Spain and Portugal, and six per cent in Germany.

Wind energy applications in the UK range from small battery-charging applications producing useful electricity remote from the electricity distribution network, to large wind farms producing electricity competitive with conventional power stations. The UK currently gets less than one per cent of all electricity from wind power. However, it has been estimated that wind power has the potential to provide 10 per cent or more of the UK’s electrical power requirements within the next 10 to 20 years.

In the UK, it is currently possible to produce electricity from wind for as little as two pence per kilowatt hour (kWh), comparing favourably with the cost of electricity from conventional sources. Low-cost generation is possible only on the windiest sites. Typically, electricity from wind will cost between two pence per kWh and 10 pence per kWh depending on scale and location. Overall wind energy projects are simple, clean and cheap to maintain. The land can still be part of the agricultural system and jobs are often created both in the short and long term in the building and maintenance of the turbines.

Wind power produces no pollutants or emissions during operation. At current prices, a typical wind turbine for electrical generation will repay the energy used in its manufacture in the first six to nine months of its operation.

The main impact wind power has on the environment is visual. This is one of the most contentious aspects when planning wind farms in the UK. In the UK, objections in the planning system (usually based on concern over the noise and visual impact of wind turbines) has led to massive barriers to the implementation of wind power projects. This problem has partially been addressed by placing an emphasis on the development of offshore wind farms in the UK, but critics argue that these are more costly than onshore wind installations.

The component parts of wind power are all fairly mature technologies, so technical efficiency improvements in recent years have come primarily from a trend towards larger turbines; however, overall efficiency advances have come from improvements in the citing of wind turbines in relation to topography and wind patterns, and this is contributing to a trend of decreasing overall costs of generation. (Source British Council, report August 2008) 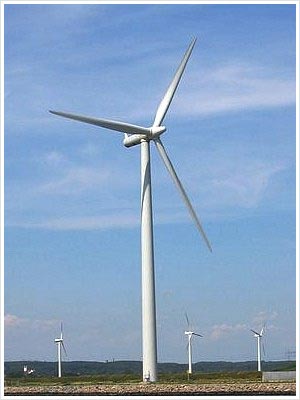