Geothermal energy is the heat stored beneath the Earth’s surface, which can be harnessed to produce electricity in power plants and hot water for use in heating and industrial applications. Although in use worldwide, its potential as an energy source is not fully utilised, and geothermal energy offers a real option in future low carbon energy supplies. Geothermal energy currently supplies about one per cent of global energy needs, and is used commercially in over 70 countries.

Geothermal energy resources are more directly accessible in some parts of the world than others. Iceland, for example, has extensive geothermal reservoirs which consist of a mass of fractured rock in the Earth’s crust that is saturated with hot water or steam. In many parts of Iceland the water flows naturally to the surface and can be harnessed directly to produce supplies of water for heating buildings at temperatures of 80ºC to 95ºC. Power plants utilise the hot water or steam from the wells by directing it to a turbine and generator to produce power (electricity), working much like any conventional power plant. In Iceland, there are five major geothermal power plants which produce about 26 per cent of the country’s electricity. In addition, geothermal heating meets the requirements for around 87 per cent of the nation’s housing.

Geothermal energy should not be confused with ground source heat pumps which make use of the effect of the warming energy of the sun on the Earth’s surface. The heat pump is able to work as a sort of backwards refrigerator – it can transfer heat from a colder outside environment to a warmer environment, such as the inside of a domestic house. In the UK, the constant ground source heat temperature is around 12 ºC and can be utilised to heat buildings. Pipe is buried underground in a trench or in a vertical well and water is pumped through it and heated by the underground energy. A heat pump can extract the ground’s heat and transfer it into a building for space and water heating, or it can remove heat from a building and deposit it into the ground to cool the building during hot weather.

Heat pumps do need some power to operate. However for every one unit of electrical energy they use they generate four units of energy in heating – that means the electricity required is just one quarter of what would be required if electricity were used directly for heating purposes, which adds up to big cost savings over time. The energy generated by a ground source heat pump can be considered 100 per cent renewable if the power to operate the pump comes from a renewable energy source such as solar PV panels or a wind turbine. The major drawback is that the initial costs of installing the heat pump can be quite high.

Geothermal energy offers a number of advantages over traditional fossil fuel based sources, primarily that the heat source requires no purchase of fuel, and emissions of greenhouse gases are small. Geothermal power plants can work continuously, day and night, making them suitable for forming part of the so-called ‘base load‘ or core of an electricity supply system.

Geothermal energy is extremely price-competitive in areas of the world with readily available geothermal energy sources (such as Iceland). Many countries, including China, Hungary, Mexico, and New Zealand, are currently exploring the potential for the further exploitation of geothermal energy.

A new technology being explored is enhanced geothermal systems (EGS), which involves, in essence, drilling two holes down to at least 10 kilometres deep into hard rock. Water is then pumped down one of the holes and steam comes up from the other hole. Drilling at this depth is now possible in the oil industry and it could be that the technical expertise could be transferred in the future to this new approach to geothermal energy extraction. (Source British Council, report August 2008) 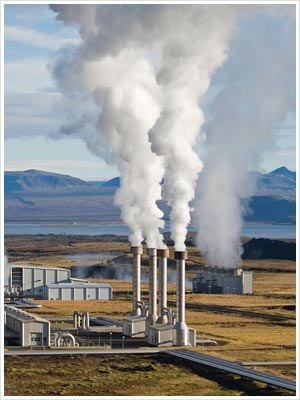