Solar photovoltaic (PV) devices convert sunlight directly into electricity. They were originally developed for use in the US space programme but from the 1970s onwards they have gradually become cost-effective for use terrestrial applications. They can be placed directly on the roofs of buildings in small-scale installations or can be installed as large collections of movable arrays in so-called solar farms. Roofing tiles that incorporate solar PV panels are increasingly being employed; these can be used directly as the roof covering of a building, thus removing the need for conventional roofing tiles.

By 2007 grid-connected photovoltaic electricity was the fastest growing energy technology in the world, with 50 per cent annual increases in cumulative installed capacity in both 2006 ad 2007 (reaching an estimated 7.7GW): that represents a recent trend of a doubling of global installed capacity every two years. Nearly half of the increase was in Germany, now the world’s largest consumer of PV electricity (followed by Japan).

In Europe a major policy driver is the EU renewable energy target; agreed in 2007, it commits 27 EU states to specific contributions to meeting an overall target of a European-wide 20 per cent boost in renewables by 2020. Germany has become the leading market for PV worldwide since implementing a Renewable Energy Sources Act, which introduced a feed-in tariff – a policy that sets a fixed guaranteed price at which power producers can sell renewable power back to the grid. Installed PV capacity has risen from 100MW in 2000 to approximately 4,150MW at the end of 2007.

Spain has become the world’s third-largest market after adopting a similar feed-in tariff structure in 2004, while France, Italy, South Korea and the US have also recently seen rapid growth, due to various incentive programmes and local market conditions. Portugal is putting huge efforts into the development of renewables, and is currently building the world’s most powerful photovoltaic solar power plant on the high Alentejo plain in eastern Portugal, one of the sunniest places in Europe. Visually it resembles a ‘vast field of mechanical sunflowers’ with 2,520 giant solar panels, each the size of a house, laid out across the high plateau over an area about twice the size of London’s Hyde Park. The total cost of the plant will be £250 million and it will supply 45MW of electricity – enough power for 30,000 homes.

In the UK there has not been as strong a focus on PVs as in some other European countries and the currently installed capacity represents only a tiny proportion of all electricity generation. Some pioneering local councils, such as Woking in south-east England, have begun fitting council houses, hospitals and retirement homes with facilities to use solar power. Grants are also available to help homeowners install PVs.

Solar PV has been a relatively expensive way of generating electricity in the past, because of the high initial costs involved. The recent extraordinary uptake rates for PV in Japan and Germany have been driven by ambitious government programmes involving various incentives and subsidy schemes. However, at present rates of market growth and price reductions, solar PV could become competitive with coal generation within 10 years. In certain niche markets PV already is a highly cost-effective solution, for example in ensuring that new buildings in the UK meet the requirements of strict new building codes.

Because solar PV requires only sunlight as input it has a huge potential. For example, it has been estimated that if PV units were installed on all the roof tops in the UK, they would produce more than enough electricity to meet all of the UK’s current needs. Already technically proven, the remaining challenge is to bring the cost of PV electricity generation down to levels where it can compete directly with fossil fuels. (Source British Council, report August 2008) 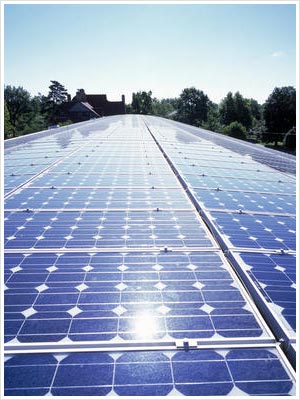