Tidal power refers to technologies which are able to convert the energy of tides into electricity (or other useful forms of power). Tidal power has a huge potential worldwide but the various technologies being developed to exploit this energy source are still, for the most part, not at a fully commercial stage. Tidal power systems can be classified into two main types:

A recent review of the potential for tidal power found that it could eventually produce up to 10 per cent of the UK’s electricity. However, environmental groups are mostly against large-scale tidal barrage projects, such as the proposal to build a massive tidal barrage across the Severn Estuary. They claim that the environmental impacts will be unacceptable and that the costs of generating electricity this way will be prohibitive.

In 2008, the UK has been conducting the first commercial tests of a tidal stream generator. The trial at Strangford Lough, in Northern Ireland, uses a device called SeaGen which was designed and built by the Bristol-based tidal energy company Marine Current Turbines. When it is eventually running at full power the SeaGen plant will have an output of 1,200 kW, enough power for about 1,000 homes.

Wave power refers to the energy of ocean surface waves and the capture of that energy for various purposes including electricity generation, desalination, and the pumping of water. Though often confused, wave power is distinct from the diurnal flux of tidal power and the steady gyre of ocean currents. Wave power generation is not currently a widely employed commercial technology.

The world’s first commercial wave farm is based in Portugal, at the Aguçadora Wave Park, which consists of three 750kW Pelamis devices. The Pelamis Wave Energy Converter is a technology that uses the motion of ocean surface waves to create electricity. Developed by the Scottish company Pelamis Wave Power, it was the world’s first commercial-scale machine to generate electricity into the grid from offshore wave energy and the first to be used in a commercial wave farm project.

The device consists of a series of semi-submerged cylindrical sections linked by hinged joints. The wave-induced relative motion of these sections is resisted by hydraulic rams which pump high pressure oil through hydraulic motor. The hydraulic motors in turn drive electrical generators to produce electricity. Power from all the joints is fed down a single umbilical cable to a junction on the sea bed. Several devices can be connected together and linked to the shore through a single seabed cable. So far, these devices are not thought to have any significant negative environmental impacts. (Source British Council, report August 2008) 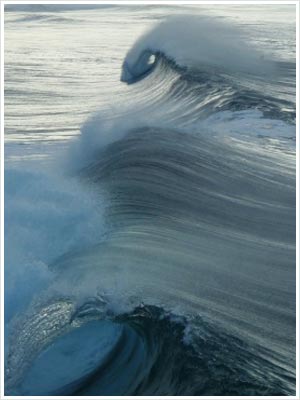