Biomass is a term used to refer to material from trees or other plants that can be used to generate usable energy. Most commonly, biomass refers to plant matter grown specifically for use in energy generation, but it may also include biodegradable wastes that can be burnt as fuel. Biomass can be burnt and the heat generated can be used directly for heating or it can be used to drive a turbine and generate electricity. The use of biomass for electricity generation and heating is growing in many parts of the world. Combining both the heating function and electricity generation in one plant is particularly attractive because it offers much greater efficiencies than just generating electricity, which results in a lot of unused waste heat. This combined approach is known as combined heat and power (CHP).

Biomass is currently derived from several different plants, including miscanthus, switch-grass, hemp, corn, poplar, willow, sugarcane, and oil palm. The particular plant used depends very much on where in the world it is being grown: different plants will be suited to different climates.

Biomass can also be converted into fuels for use in transport and these are often referred to as biofuels. The principal of biofuels is simple: a renewable resource in the form of specially grown crops can be refined to produce a fuel that can be used in conventional (or slightly adapted) vehicles, thus reducing the need for oil.

These debates mean that the role of biofuels in addressing climate change is likely to be reviewed in the coming years. What is clear already is that biomass is likely to have an important role to play in parts of the world, such as northern Scandinavia, where there are large tracts of land suitable for the commercial production of biomass (as forestry) but not suitable for agriculture. Here the use of biomass in CHP plants to provide electricity and district heating is almost certain to be a major component of future renewable energy systems.

There is also a clear role for biofuels produced using agriculture waste as a feed-stock. Multinational petrochemical company Shell, for example, has a large-scale pilot project in Canada that is aimed at developing commercially viable biofuels from waste straw. In other areas of the world where land suitable for conventional agriculture is being diverted for use in the production of biofuels for transport, a careful balance will need to be found between the need to produce affordable and clean fuels and the need to ensure food security.

Brazil provides a fascinating example of the potential for a switch to the use of biofuels. For over 30 years Brazil has been developing an industry based around the use of ethanol produced from sugar cane as a fuel in vehicles. Brazil is now the world’s second largest producer of ethanol and the world’s largest exporter, and claims to have the world’s first sustainable biofuels economy and biofuel industry. Today all light vehicles in use in Brazil use an ethanol-based fuel; some use a fuel that has 20–25 per cent ethanol, but at least 8 million vehicles are able to run solely on 100 per cent ethanol fuel, source British Council, report August 2008 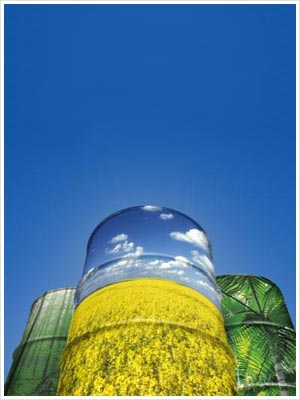